As we walked up the dark stairway that creaked with each step, Val said, “This is where the nuns used to live.” We got to the top of the stairs and entered a room that was pitch black. The room’s only window had been boarded up. Our only source of light was the flashlight app on Val’s phone, which was illuminating 100-year-old paintings on the wall that depicted scenes from the Bible. We turned the corner, and Val, who was standing behind me, said: “And this was Mother Joseph’s apartment; not many people were allowed in here.” As light from Val’s phone flickered, I saw what looked like a refuge for meth users: a stained mattress on the floor, faded 1970s posters on the wall, detritus scattered around the room. I was trying to keep my cool, but the whole time I was thinking to myself, “I’ve known this woman for all of 20 minutes, and now she’s taken me to this dark corner of an abandoned building… Nobody even knows I’m here.”

I obviously lived to tell about this experience, so Val isn’t an ax murderer who’d lured me into a trap. No, Val Gregory is the very friendly, funny and creative Executive Director of the Chamber of Commerce for Colfax, WA. She agreed to meet with me when Team ProjectWA was touring Washington’s Palouse region this week. Val also manages the Colfax Historic Preservation Commission, so the Chamber and Historical Society are co-located in the Perkins House, the oldest home in Whitman County.

Within a few minutes of parking the ProjectWA RV in front of the Perkins House, Val suggested we take a tour of St. Ignatius Hospital, which sits on the hill above downtown Colfax.  The building, which was a care facility for developmentally disabled children and adults until it was closed in 2003, has remained abandoned ever since – gradually becoming known as the “haunted hospital” on the hill. St. Ignatius, built in 1893 by the Sisters of Providence, was Whitman County’s first and only hospital until 1968. It was designed by Mother Joseph herself, who lived there for years with other nuns who ran the place. As I learned over the next hour, St. Ignatius had some… quirks. 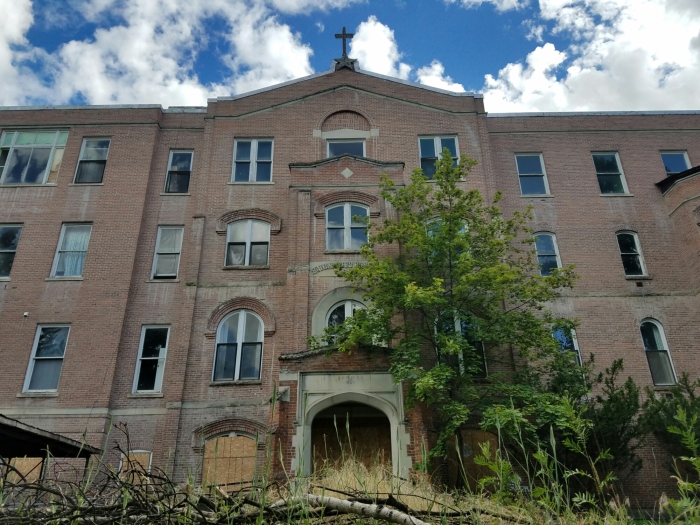 Val drove me up to the hospital in her pickup truck. The exterior of the building was right out of an old Scooby Doo cartoon. “Watch out, there’s a colony of bats that lives in the chimney,” Val said when she flung open the door and invited me in. I stepped into the hallway, which was extremely cold considering outside it was pushing 90 degrees.

“I have a present for you,” said Val as she tossed me a light blue hospital gown with “St. Ignatius Hospital” embroidered on it. “We found several of these in the basement morgue last week.”

“Of course the hospital has a morgue in its basement,” I thought as I accepted my Colfax souvenir.

Val then proceeded to give me a tour of every floor of the five-story brick building. Plaster peeled from the walls, shards of glass from broken windows lay scattered on the floors, and old wheelchairs and hospital bed frames were randomly placed throughout. Every room had a story.

“This is the infectious diseases floor,” explained Val, who went on to tell me about the patient who’d been admitted in the 1950s for maggots growing between her toes. Then there was the one about the three-year-old who’d died here after swallowing chrome cleaner.

When we got to the room where babies were delivered, it became clear that Val was born to give this tour – literally. That’s when Val told me she was delivered right here at St. Ignatius Hospital in 1966. Then she cheerfully asked, “want to check out the nuns’ old apartment?”

Val Gregory showing me the room where she was born

It was at that point that I began wondering if Val was out to get me, or if she was a genius. After surviving the tour, I decided: definitely the latter.

Val’s been in her position for barely a year. After three days on the job, she asked her bosses if they knew who owned the abandoned hospital on the hill, and how could she get the keys. Val wanted to open it up for tours.

“Val, that’s crazy; nobody wants to go in there,” they told her. On the contrary, Val said, “People love scary stuff.”

That was in October 2015. Since then, more than 2500 people have toured the hospital – paying $45 for nighttime “ghost hunts” and $20 for day tours.  Organizations from all over the U.S. have sent in their paranormal teams to study St. Ignatius. In August, the Discovery Channel plans to spend a week in the building on “paranormal lockdown.” Yes, Val is definitely a genius.

If you visit any small town like Colfax these days, “ghost town” is a dirty word. Industries mature and disappear. Big box and online retailers cause Main Street retailers to close down. Younger generations move to the big city. Val Gregory has realized that Colfax’s greatest weakness – abandoned buildings – is also its greatest strength. She’s embraced the ghost. The tagline for her shop local campaign? “Ghost Towns Happen When You Don’t Shop Local.”  Val has moved beyond haunted hospital tours. She’s secured the keys of several of Colfax’s empty buildings downtown – from the old Mason Lodge to the doctor’s office that’s been vacant since the 1950s. 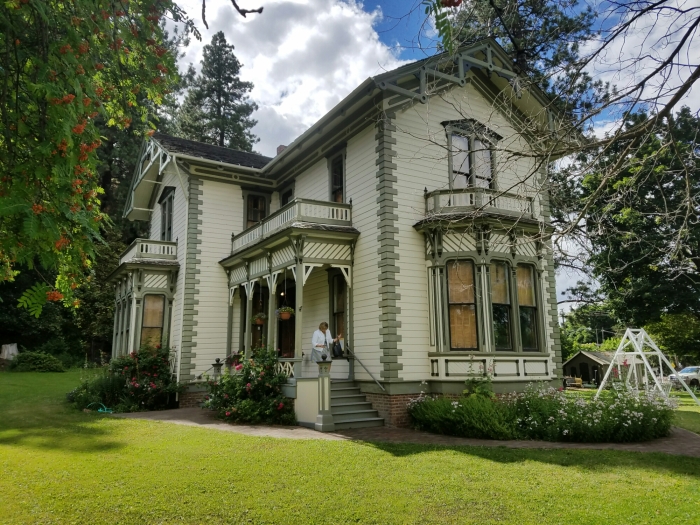 According to Val, Colfax’s mayor, Todd Vanek, recently said, “I never thought we’d be a ghost town, but I’m glad we are now.” With the revenue that Val has brought in with the ghost tours, I’m sure the mayor is much more accepting of empty storefronts on Main Street.

As I’ve visited dozens of small communities around the state, it’s become clear that historic towns like Colfax aren’t necessarily destined to be actual ghost towns. Their historical assets – from haunted hospitals to train depots – can be mined and harvested just like the hills above Colville or the fields of the Palouse. All it takes is a bit of creativity, and maybe a somewhat twisted sense of humor. Thankfully, Val Gregory has both. 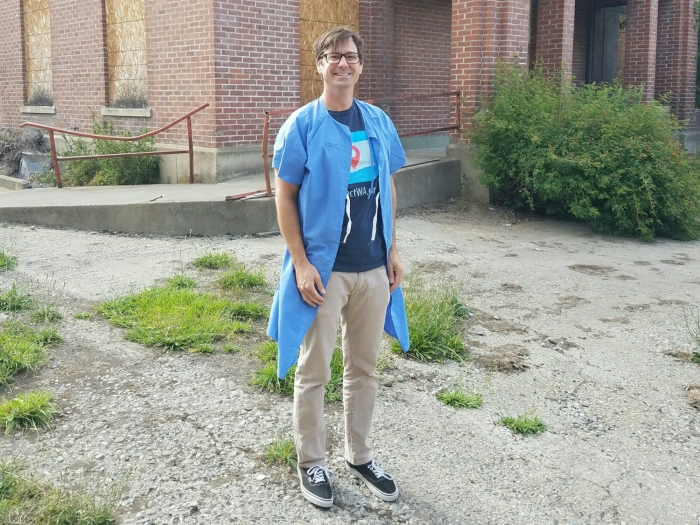 9 thoughts on “Embrace the Ghost ”