In most places in Washington State, where a town developed was decided by the people who first inhabited the area or by the European settlers and American pioneers who showed up later.  Seattle owes its map to the Dennys and Mercers. Spokane (originally Spokane Falls) grew up along the Spokane River because early pioneer James Glover saw the falls as a great place for a sawmill. Most towns have a similar story: somebody shows up and says, “let’s settle here” – usually due to proximity to a natural resource like a river, bay, forest or farmland.

This week I learned that early development of Chelan County – and the placement of its county seat, Wenatchee – was decided by a guy who never lived there. The great folks at the Chelan History Museum introduced me to local historian, Rod Molzahn, who told about the decisions that drove early development and governance of the region.

In the late 1800s, railroads were rapidly making their way west – the most significant of which was the Great Northern Railway. Its owner, J.J. Hill, was friends with a Seattle attorney and judge by the name of Thomas Burke (as in the Burke-Gillman Trail in Seattle).  Burke’s good friend, Hill, fed him some very valuable inside information: the route his railroad would take through central Washington.

At the time, the town of Wenatchee had already started to take shape. It wasn’t where current downtown Wenatchee is; instead, it was up on the flat. According to Rod, “it had all the things a town needs to thrive – a meat market, hotel and a saloon.”

Burke knew the railroad would cut through the land closer to the Columbia River, well below the already established town. So, like any good insider trader, he quietly bought up 640 acres – at a very low price – along the river. Burke’s Wenatchee Development Company started a campaign to get people to move their businesses from “old town” to “new town.” He hired a couple from Ellensburg to start a newspaper in Wenatchee and act as his propaganda arm. He even sweetened the deal for businesses by offering to move their buildings closer to the river. Eventually, Burke’s scheme started to work. Businesses began to move, people learned about the railroad’s plans, and the value of Burke’s land by the river started to skyrocket.

As Wenatchee and surrounding towns such as Cashmere, Chelan, and Stehekin started to thrive, a bill was passed in the state legislature to create Chelan County by carving off pieces of existing Kittitas and Okanogan Counties. This was fought aggressively by Okanogan County, which finally acquiesced in exchange for $77,000 in damages paid to them by the newly formed Chelan County.

The formation of a county required the appointment of county commissioners, the establishment of a county seat and the building of a courthouse. A compromise was struck between the geographically dispersed towns of Cashmere, Chelan and Wenatchee: the state legislature appointed three commissioners – one from each town.

With county commissioner representation decided, the towns couldn’t agree on the placement of the county seat. Chelan argued its nearby hydropower made it a good choice. Wenatchee, of course, had the railroad. Nobody had money to build a courthouse, though. After all, they had a $77,000 debt to pay to Okanogan County.

Guess who had a solution? Good ‘ol Judge Burke just happened to own a 3-story hotel in “new town” Wenatchee that he was willing to deed to the City of Wenatchee – for one dollar – provided that the County Commissioners name Wenatchee as the County Seat. The County Commissioners accepted the offer and to quiet the objections from the Chelan people ,the commissioners appointed Chelan area men to be the county’s first officers, including Sheriff Frank Keller, a rancher from Stehekin – a  tiny town accessible only by boat at the north end of Lake Chelan. “That was a great recipe for rapid response,” joked Rod, as he continued the story.

Because the county commissioners had to travel long distances to get to the county seat, Burke gave them each a room on the third floor  of his hotel – rent free. That’s how Wenatchee became the county seat for Chelan County. Coincidentally, that’s also how Judge Burke’s land increased in value.

So far on the ProjectWA road show, I’ve been fortunate to meet with several town leaders who have provided some colorful stories about their respective communities’ history. Early on, natural resources such as rivers, farmland or forests usually determined where a town grew. Later – as Judge Burke demonstrated – the railroad started to play that role.  In the information age, I think the next major economic factor for communities might be interesting stories. If so, Chelan County is going to do pretty well.

If you’re interested in some of those stories, stop by the Chelan Museum – they have quite a few. While you’re there, collect your points for visiting in the Washington State Insider app. 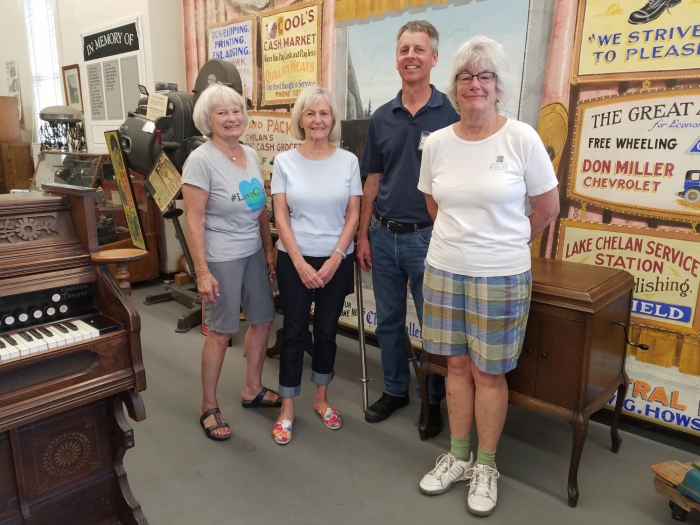